Coffee has received a pretty bad rap over time, copping blame for anything from ‘the shakes’ to afternoon office lunacy. Recently, however, the health benefits of coffee have slowly been revealed, making the practice of regular coffee drinking not only acceptable, but desirable. Coffee’s main redeeming quality still remains the same; people can’t get enough of caffeine’s impressive ability to curb drowsiness. From that early morning cup of joe, to the combative 3:30-itis iced latte - coffee is that friend many rely on for a pick-me-up. 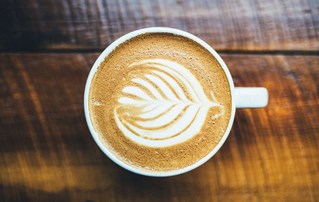 Caffeine is a naturally occurring substance found in tea, coffee, cocoa, and an additive in soft drinks and energy drinks. Better Health Channel explains that caffeine is a stimulant for the brain and nervous system, helping people feel re-energised when consumed. However, you can have too much of a good thing. Higher doses of caffeine can result in sleeping issues and anxiousness in some people.

Similar to the hormone adrenaline, caffeine mimics the action of the adrenal glands. When in a stressful situation, the adrenal glands shoot adrenaline into the bloodstream; causing increased breath rate, heart palpitations and a short burst of physical energy. Adrenaline is responsible for the ‘fight or flight’ response in the body, hence the feelings of bravado and higher functioning after a few sips.

How much is too much?

As caffeine is a drug, overconsumption can build up a tolerance – meaning your body may require larger doses to receive the same initial effect. Withdrawal from caffeine can cause crankiness, headaches, tiredness and muscle pain. Quitting cold turkey is often difficult, but slowly cutting down caffeine intake will eventually condition your nervous system to function effectively without it.

Nobody likes a snob. But coffee snobs might be onto something with their caffeine intake… research from circulation found that consumption of one to five cups of coffee per day was associated with lower risk of mortality: the study’s 30 year follow up research found regular coffee drinkers had a lower risk of dying from problems such as heart disease, diabetes, brain conditions and suicide.

Antioxidants are found in certain foods and are useful in combatting damage caused by ‘free radicals’ – unstable chemicals that damage cell membranes and other structures. Some free radicals are required for effective bodily functioning, however overconsumption of free radicals over time may lead to diseases detrimental to the body.

Antioxidants are compounds in foods that neutralise free radicals and are thought to help prevent heart disease and some cancers. They can be found in fruits, vegetables… as well as, you guessed it, caffeine! Caffeine itself is an antioxidant.

One study from Diabetologia found consumption of 3 cups of coffee and/or tea per day could reduce the risk of Type 2 diabetes by around 42%. Research from the Journal of Natural Products suggested that certain elements in coffee helped protect against Type 2 diabetes. Two components present in caffeine and decaffeinated coffee, cafestol (a bioactive substance in coffee, which stimulates insulin secretion and increases glucose uptake in muscle cells) and caffeic acid, appeared to combat symptoms of diabetes in the cells of lab rats. The cafestol was found to increase blood sugar intake in cells, with both elements increasing insulin secretion; thus helping to regulate blood sugar levels.

Some chemicals found in coffee may help reduce inflammation that causes alzheimer’s with research showing coffee drinkers have up to 60% lower risk of developing alzheimer’s and dementia. Moderate consumption of coffee is also associated with lower risk of stroke in women with combined tea and coffee intake also argued to lower the risk of coronary heart disease.

You know that buzz you get after a cup of coffee? Caffeine works to stimulate the nervous system, increasing mood-improving neurotransmitters like serotonin, dopamine and noradrenaline. One hypothesis suggests that the anti-depressive effect of caffeinated coffee consumption is a direct result of the caffeine. Caffeine is a psychostimulant that can increase wakefulness and motivation.

You were all thinking it, so we’ll go ahead and say it: coffee, being a stimulant, causes an urge to empty the bowels. Certain compounds in coffee are said to trigger higher acidity levels in the stomach, as well as activating the hormone gastrin that aids digestion – both speeding up our bowel movements through contractions of the stomach and intestinal tract.

Having addressed some of the myths surrounding coffee, we can conclude that having one to five cups of coffee a day shouldn’t be detrimental for most people. Given its dehydration effects though, it’s always a good idea to chase your favourite cup of coffee with a glass or two of water. Coffee is the world’s most popular psychoactive drug, so addiction and dependence may occur. Those who can’t control their intake, or have extra sensitivity to caffeine, should look at ways to curb intake by replacing coffee with decaffeinated substitutes. Women who are pregnant and those with heart conditions should seek medical advice or try sticking to decaf or herbal tea. To everyone else, bottoms up for another latte.