Creating a better future for children 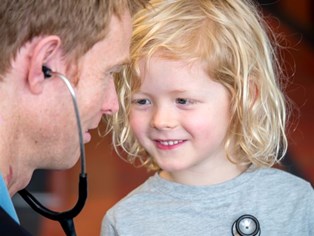 We are committed to improving the health of the community for future generations. That’s why we support the Barwon Infant Study. Great Health recently spoke to Paediatrician Dr Peter Vuillermin to learn about the study’s recent findings and how what we do today can improve the health of our children tomorrow.

What is the Barwon Infant Study?

The Barwon Infant Study (BIS) is a major birth study conducted by the Child Health Research Unit at Barwon Health in collaboration with the Murdoch Children’s Research Institute (MCRI) and Deakin University.  The project aims to understand the factors that influence the development of illness and disease in babies and children.

Why is the BIS is important?

By understanding how the health of mothers and the environment they are exposed to before and during pregnancy can influence the genetic make-up of babies and children we can target initiatives to prevent or reverse chronic immune and inflammatory disorders.

More than 1,000 pregnant women were recruited from the Barwon region between 2010 and 2013, to participate in the study. Data has already been collected on more than 610 four year-old children and exciting discoveries have already been made.

The immune system’s influence on later development of allergies

The study has found a pattern of immune activation at birth that is associated with an increased risk of babies developing food allergies in early life. This is important because it shows that the immune systems of babies who develop food allergies are in a sense ‘primed’ for allergic disease by the time they are born. BIS is doing more work to understand if the hyperactive immune cells present at birth are activated by the baby’s genes, or whether they are activated at the time of birth or earlier in the pregnancy.

Maternal depression and anxiety during pregnancy is a significant issue for women, but evidence has shown that it can also have consequences for the unborn child, increasing the risk of adverse health outcomes both at birth and later in childhood. When an expecting mother experiences depression or anxiety, the accompanying chemical and hormone changes alter the environment inside the womb and the ‘shape’ of specific genes in the baby at birth. BIS is continuing their research in this area to determine if the mental health problems experienced by one generation can be prevented from being transmitted to the next. The study has published two papers on this research.

A recent paper published by BIS demonstrated for the first time a link between factors that may influence a baby’s gut bacteria and early markers for cardiovascular risk. Associations were found between markers of the mother’s bacterial exposures and the thickness of their baby’s arterial walls.

These markers included pet and livestock ownership, as well as whether the mother was Group B Strep (GBS) positive on routine screening. Women are screened for GBS in late pregnancy as it may cause life-threatening infections in the baby. Importantly, these associations were only seen among the babies born vaginally, suggesting the pathway is likely to involve inoculation of the baby with the relevant bacteria during the birth process.

The BIS has also demonstrated a link between women’s weight before pregnancy and their babies' adiposity (fatness) and inflammation at birth. Excess weight and inflammation, the so-called ‘metabolic syndrome’, has become very common in Australia and is linked to increased risk of diabetes, heart attacks and strokes. In countries such as Australia and United States, almost half of women of childbearing age are overweight. Animal studies have shown that babies of overweight mice are born with increased fat and inflammation and that this problem can increase generation by generation.  The study, published in the journal Pediatric Obesity, is the first to show an association between women’s weight before pregnancy and their baby’s risk of being born with increased fat and inflammation.

It leads to a really important public health message: optimising your own weight before you get pregnant is associated with baby being less likely to be born with too much fat and inflammation.

BIS is continuing to do more work in this area, including:

Another goal of the BIS is to understand whether specific bacteria or groups of bacteria promote healthy development in the baby. “We have recently received a huge amount of data regarding the bacteria present in the mother and baby’s poo samples. Early analyses are looking very exciting – watch this space!!” says Dr Peter Vuillermin.

All studies and important papers cited above are published by BIS and can be found on the Barwon Infant Study website.

If you are interested in supporting this important research, please donate to our community partner, Barwon Health Foundation.